TO SEE BETTER WHEN FOLLOWING A VEHICLE AT NIGHT:

The headlights of the car ahead can give you a better view of the road than even your high beam can. Taillights bouncing up and down can alert you to bumps or rough pavement.

MAKE A SPECIAL POINT TO USE YOUR MIRRORS WHEN: 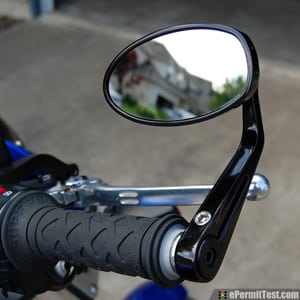 Check your mirrors when you are stopped at an intersection. Watch vehicles coming up from behind. If the driver is not paying attention, he could be on top of you before he sees you.

IN THE PICTURE, THE CAR DRIVER IS PREPARING TO ENTER THE INTERSECTION. TO BE SEEN AND MAINTAIN A SPACE CUSHION, YOU SHOULD: 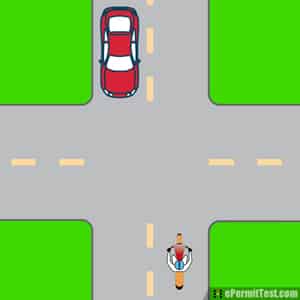 WHEN THE FRONT TIRE GOES FLAT WHILE RIDING:

If a tire goes flat while riding, hold the handgrips firmly, ease off the throttle and keep a straight course. Avoid braking. If braking is necessary, gradually apply the brake off the tire that isn't flat.

VEHICLE/MOTORCYCLE COLLISIONS ARE MOST COMMON:

Over one-half of motorcycle/car crashes are caused by drivers entering a rider’s right-of-way. Cars that turn left in front of you, including cars turning left from the lane to your right, and cars on side streets that pull into your lane, are the biggest dangers.

WHILE IN A TURN, IT IS BEST TO:

Braking while turning will unload the rear wheel, reducing traction and possibly causing a skid. Reduce your speed before the turn, maintain constant speed or accelerate slightly through the turn to improve traction and control.

WHEN SWERVING TO AVOID A HAZARD, IT IS IMPORTANT TO:

If braking is required, separate it from swerving. Brake before or after – never while swerving. Trying to swerve while braking is likely to result in one or two wheels being locked and complete loss of control over the bike.

NOT TURNING OFF A TURN SIGNAL:

Once you turn, make sure your signal is off or a driver may pull directly into your path, thinking you plan to turn again. Use your signals at every turn so drivers can react accordingly. Don’t make them guess what you intend to do.

Keep the load forward. Pack heavier items in the front of the tank bag. Lighter items such as your sleeping bag, ground pad or tent, should be packed on a luggage rack behind you. Try to place the load over, or in front of, the rear axle.

FOLLOWING CLOSELY TO A VEHICLE IN FRONT OF YOU:

“Following too closely” is a major factor in crashes involving motorcyclists. In traffic, motorcycles need as much distance to stop as cars. Normally, a minimum of four seconds distance should be maintained behind the vehicle ahead.

OF THE FOLLOWING, WHICH ONE GIVES THE MOST EYE AND FACE PROTECTION WHILE RIDING?

A plastic shatter-resistant face shield can help protect your whole face in a collision. Face shields, when lowered and locked-in, offer protection from wind, dust, dirt, rain, insects, pebbles, and other debris.

WHEN RIDING WITH A PASSENGER, YOU SHOULD:

The heavier your passenger, the longer it may take to slow down, speed up, or turn — especially on a light motorcycle.

TO MAKE GOOD JUDGMENTS IN TRAFFIC, YOU NEED TO FIRST:

Search aggressively ahead, to the sides and behind to avoid potential hazards even before they arise. How assertively you search, and how much time and space you have, can eliminate or reduce harm.

RIDING IN THE CENTER PORTION OF THE LANE:

If the traffic situation allows, the center portion of the lane is usually the best place for you to be seen by the drivers ahead and to prevent lane sharing by others.

THE ABILITY TO THINK CLEARLY AND RIDE SAFELY IS AFFECTED BY AS LITTLE AS:

While our bodies can generally eliminate alcohol in the body at the rate of one drink per hour, alcohol may still accumulate and affect your ability and judgement.

TO RIDE OVER AN OBJECT ON THE ROAD

If you must go over an obstacle, slow down as much as possible before contact and make sure the motorcycle is straight. Rise slightly off the seat and roll the throttle slightly to lighter the front end.

A GROUP OF RIDERS MOVE FROM A STAGGERED FORMATION INTO A SINGLE FILE WHEN:

Move into a single-file formation when riding curves, turning, and entering or leaving a highway.

ON A WET ROAD, IT WILL USUALLY BE MOST SLIPPERY

The center of a lane can be hazardous when wet. When it starts to rain, ride in the tire tracks left by cars. Often, the left tire track will be the best position, depending on traffic and other road conditions as well.

YOU ARE PREPARING TO MOVE TO THE LEFT LANE. TO SPOT VEHICLES PASSING BESIDE YOU, IT IS BEST TO: 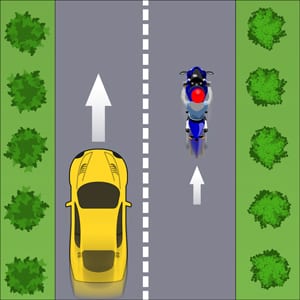 Before you change lanes, turn your head, and look to the side for other vehicles. On a road with several lanes, check the far lane and the one next to you. A driver in the distant lane may head for the same space you plan to take.

YOU PLAN TO MAKE A RIGHT TURN AFTER STOPPING AT AN INTERSECTION. USUALLY, IT IS BEST TO TURN FROM WHICH PORTION OF THE LANE?

When you are stopped at an intersection and use one of the side portions of the lane (either right or left), other drivers may try to squeeze past you. Discourage this behavior and lane sharing by positioning the bike in the middle of the lane.