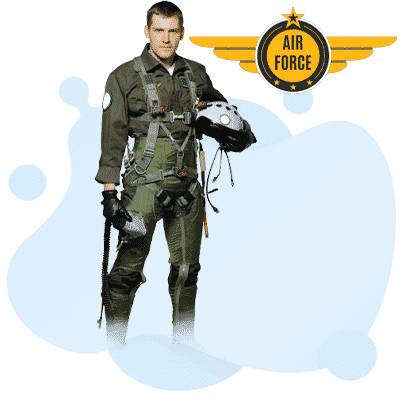 What is AFOQT Test?

The AFOQT is also used as requirements for pilot, air battle manager (ABM) training, and combat systems officer (CSO). In addition, it is also a component of the Pilot Candidate Selection Method (PCSM) score. It is required for all students receiving a scholarship as well as those in the Professional Officer Course (POC).

The AFOQT test is taken nationwide by current and potential members of the United States Air Force. In the Air Force ROTC program, it is taken by sophomores before field training in the summer after their sophomore year.

It is offered through Air Force ROTC programs at universities and military recruiters at Military Entrance Processing facilities. Individuals who wish to take the test don’t have to pay anything; however, they must make arrangements through their recruiter, ROTC program, or commanding officer, as appropriate. The rules for retesting depend on the intent or program for which the test applicant wants to use the scores, but some ROTC programs require one testing, with the most recent score counting.

AFOQT is a multiple-choice test consisting of 12 subtests totaling 550 questions with an allotted time of almost five hours, comprising three hours and 36.5 minutes of testing period and a little over an hour of break time and test administration time. It is taken with a pencil and scored by machine. It consists of twelve AFOQT test sections.

The AFOQT scores are based on the number of questions correctly answered. There is no penalty for speculating incorrectly, apart from the missed chance to get points from a higher number of correct answers. Scores from the different test parts are used to measure the cumulative scores submitted to the examinee and the Air Force.

AFOQT composite scores are given in the following areas:

A composite score shows the ability to act as a pilot and incorporates the outcomes of the mathematics knowledge, instrument comprehension, and table reading test segments. It also contains your aviation information test score, which evaluates you in areas such as aeronautics and perceptual speed.

This score incorporates your results in the verbal analogies and mathematics knowledge test portions and in table reading, instrument comprehension, block counting, and aviation information.

A composite score incorporates the grades in both the quantitative and verbal skills test segments.

This score is extracted from your results in the word knowledge, reading knowledge, and verbal analogies test portions.

In this composite score, the math knowledge and arithmetic reasoning test results are combined.

Your rating for this test portion tests your ability to act as a leader and handle interpersonal issues.

Although there is no set AFOQT passing scores, applicants need to meet AFOQT Minimum Scores to become an officer. Alternatively, the required AFOQT test scores differ depending on the desired job or program for which the test-taker is seeking admission. For example, an applicant wishing to become an officer might be able to do so with a fairly low percentile mark (i.e., by only surpassing a small number of other testers), while an officer pursuing to become a pilot might need far higher overall results, especially in the Pilot Composite area.

If you’ve already taken the AFOQT and seek to gain your AFOQT results, you may visit the Air Force Personnel Center site. Results are normally posted about 8-10 business days after your test date. You will need to enter your social security number, last name, and test center number to access your results. 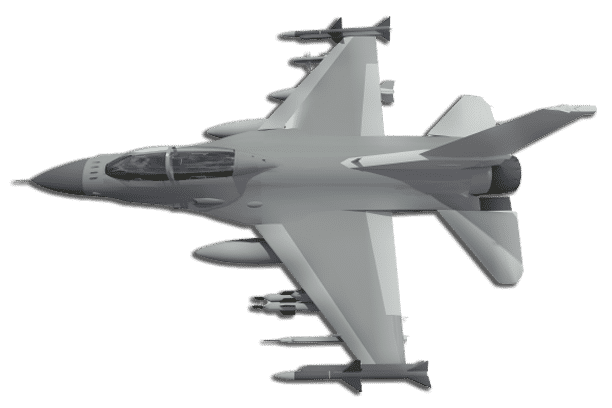 There will be two options to apply for the AFOQT, both of which are explained in detail below.

If you’re not affiliated with the Air Force ROTC program, you can still register to take the AFOQT. You may need to visit the official site of the Air Force to find a recruiter in your area. You will be prompted to enter your zip code, together with the highest educational level you possess. You should then be able to access your nearest recruiter’s address, mobile number, and email address. The website also offers the chance to talk live with the Air Force Adviser. You will have to create an account to talk with one of them.

Once you communicate with your recruiter, he or she will assess if you meet the AFOQT criteria. If that is the case, your recruiter will help you sign up for the test.

Can you commission in the Air Force with a low GPA?

No. You prob won’t even get into the Air Force without a high school degree. Commissioned Officers necessitate a 4-year degree and OTS (Officers Training School) or acceptance and graduation from the Air Force Academy. The only exception is a high-ranking NCO who holds a field commission, but that only occurs during wartime and is dependent on need and experience.

How to become a pilot in the Air Force the quickest?

The following are the steps to becoming an Air Force pilot.

Does GPA matter for Air Force?

The Air Force likes its officers to have a rather high college GPA (3.2 or more is considered profitable). In the case of pilots, while a professional degree is not necessary, a really high GPA and a high score on the Navigator/Pilot portions of the AFOQT are desired.

How important is the AFOQT?

Do you get a calculator on the AFOQT?

You can not use a check calculator. Watches are permitted if they do not have a function of a calculator.

How many times am I permitted to take the AFOQT?

You can take AFOQT twice. But the most recent test score will be the one counted. In rare cases, you may be given a waiver to take the AFOQT more than twice. If you don’t pass the first attempt, you’ll be able to take the test a second time after 150 days.

How Long Are My AFOQT Scores Valid?

Good AFOQT scores are valid for a lifetime. If you took the old ‘S Form’ AFOQT, your scores have been adapted to the new ‘Form T’ format.

How to study for Air Force ASVAB?

Can you join Air Force with GED?

If you have a GED, you can join the US Air Force. However, you will need to follow a few further steps in order to be accepted into the Air Force. It’s no secret that joining the Air Force is a difficult task.

What is the passing Air Force Firefighter ASVAB score?

Obtaining certification as a Fire Prevention Specialist in the Air Force
Airmen, you have to get an ASVAB score to join air force with a score of at least 38 on the general (G) Air Force Qualification Area of the Armed Services Vocational Aptitude Battery (ASVAB) examinations are eligible for this position.

What is the Air Force Academy Physical requirements?

The United States Air Force Physical requirements are not only mental and moral strength, but also physical strength. To be a competitive applicant, you must be able to demonstrate that you are physically capable of meeting the physical demands of Academy life.

What is the minimum ASVAB score for Air Force?

You will take the Armed Services Vocational Aptitude Battery (ASVAB) entrance exam when you seek to join the Air Force as an enlisted Airman. The minimal qualifying score for high school seniors or graduates is 36 on the AFQT (overall score). GED holders must pass the AFQT with a score of 50.

Like any test, AFOQT test prep is essential to your chances of winning the next AFOQT exam. To effectively prepare for your upcoming AFOQT test, you may use free AFOQT practice tests and AFOQT online study guide intended for AFOQT test-takers. There are plenty of AFOQT practice and AFOQT study materials like AFOQT prep course that you can use to your advantage.

Aside from the best AFOQT study guides and practice materials available electronically, we have listed a few tips and tactics below to help you learn a few of the techniques that can be used when taking the test:

Anticipating the answer before examining the choices removes the risk of being disturbed or fooled by a wrong choice of answer. If you read the question, anticipate the answer, and afterward find your answer among the options, you will feel more comfortable. Make sure to check all the options carefully and thoroughly. If you feel unprepared, do not try using this technique as it would waste your precious time and make your brain drift in the opposite direction.

Frequently, test-takers explore a multiple-choice question, recognizes familiar words, and immediately go to the choices. Test writers are knowledgeable of this, and they may capitalize on it, subtly diverting the emphasis of the question. To avoid falling into such traps, make sure to read the whole question thoroughly before you rush to the answer choices.

Tip #3. Look for the wrong answers.

Long and difficult multiple-choice questions can be overwhelming, and one method to alleviate this is to remove all the obviously wrong responses. Sometimes deleting the wrong answer will give you some clues about the right answer.

Nervous exam-takers often over-analyze questions. When you’re anxious, your imagination sometimes runs wild, leading you to make connections and find hints that don’t really exist. When you believe this can be a concern for you, do what you can to slow down during the exam. Try to breathe deeply or count to 10. As you read and understand the issue, limit yourself to the specific words used by the author. You should avoid reading too much about a multiple-choice question or thinking that the author meant something other than what he or she had written.

Cat is to paws as

❏ Giraffe is to neck.
❏ Elephant is to ears.
❏ Horse is to hooves.
❏ Snake is to skin.
❏ Turtle is to shell.

Read the following passage and select the best definition for the word in bold:

Everyone had said his piloting acumen was not to be questioned. He had a knack for feeling the aircraft, as if it was an instinctual part of himself. He had a knowledge base he’d built up over years of study and thousands of flying hours; but moreover, he had the ability to think and act quickly in the most unexpected circumstances.

You have an innovative plan for your unit that, in your opinion, will improve performance. Not everyone in the unit is of the same opinion, and some downright oppose your plan. Even though the plan has not been put in motion, someone has already written a letter of complaint and sent it to your superior.

What would you do?

❏ Don’t worry about anyone else’s opinion, and implement the plan.

❏ Ignore the letter of complaint, and push forward with the plan.

❏ Have a meeting with the unit, including the person who wrote the complaint to your superior, and explain to                 everyone again the chain-of-command and how it is to be used.

❏ Discipline the person who wrote the letter of complaint so that no one else in the unit will break the chain-of-             command in the future.

❏ Give up your plan in the wake of opposition, and see what the unit would like to do.

The next questions are based on the following table.

Looking at the instruments on the left, which choice depicts the orientation of the aircraft? 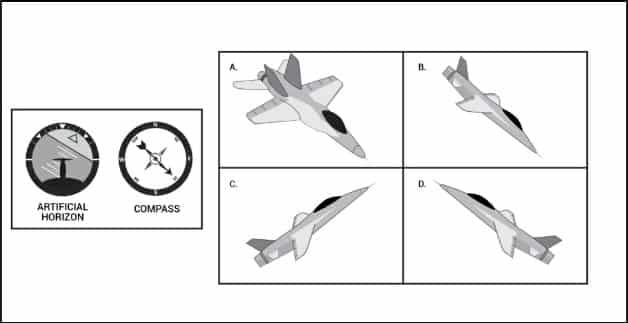 Determine how many blocks the given block is touching. 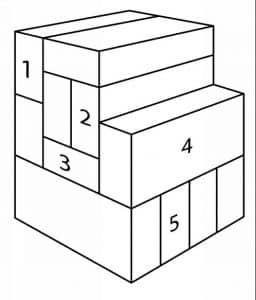 Which of the following is not a type of landing gear?